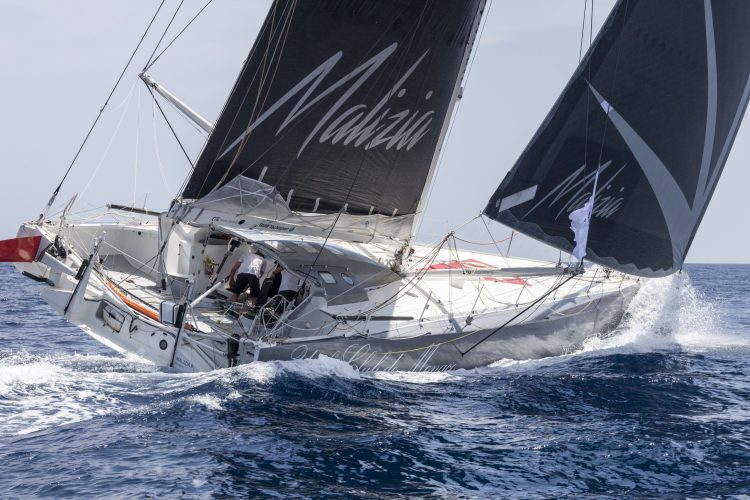 Reshuffle at the top

Monaco 5th June 2018. No day is the same for this Monaco Globe Series, the first stage of the new IMOCA 2018-2020 world championship. Organised by the Yacht Club de Monaco, it’s a chance for participants to gain maximum points towards qualifying for the Vendée Globe 2020. Since the start of the double-hander, non-stop, unassisted offshore race, competitors have faced widely varying conditions forcing all manner of manoeuvres.

It took under 24 hours for the nine 60-footers to reach southern Sardinia from the Strait of Bonifacio where a 30-knot wind was blowing. There was no let-up in the seesaw conditions that demanded compromises in terms of trajectory as evidenced by Alain Gautier, co-skipper on Monin: “It was a lively leg, and physically demanding with lots of sail trims. We haven’t slept much but conditions are interesting and the scenery spectacular.” It was a similar story on other boats, like Alexia Barrier on 4myplanet2 who said “the weather dictated a demon pace with lots of manoeuvres. But we’ve beaten the boat speed record with 24.5 knots!”

On the Sardinia descent some took the easterly option where there was a little more wind, like Malizia II skippered by Pierre Casiraghi and Boris Herrmann. Others like SMA took a more direct route. “A decision that paid off,” reckons Race Director Guillaume Rottee, “as today Paul and Gwénolé are in a group with three boats: Monin, Kilcullen Team Ireland and Newrest-Art & Fenêtre, all battling for first place.” A shuffling of the pack that’s also going on behind them. In fact Malizia II and Bureau Vallée 2 have been locked together for several hours keeping an eye on their respective progress.

The fleet rounded the passage mark south-west of Cagliari early this morning and are now heading back up to Ile Bagaud and the Porquerolles. “The course crosses two weather systems,” says the Race Director. “The first is active the length of Sardinia and the second more to the west and windier.”

SMA has clearly indicated their determination to take a direct route again, unlike Monin who is further west. With 5-8 knots expected in the coming hours, the weather looks set to produce some interesting duels.

To give an idea of what it’s like on board and bring the race alive to sailing fans inside, boats are sharing videos and snapshots on social networks (https://www.facebook.com/yachtclubmonaco/).

Competitors are clearly enjoying this beautiful route and all the wildlife. Alexia Barrier and Pierre Quiroga (4myplanet2) have reported a turtle and blue and white dolphins. Mediterranean fauna at its best.

They should reach the next mark early evening on Wednesday 6th June.  Note: the positions of all the boats are tracked every 30 minutes and published on a map of the course: http://bit.ly/2JdTu4i