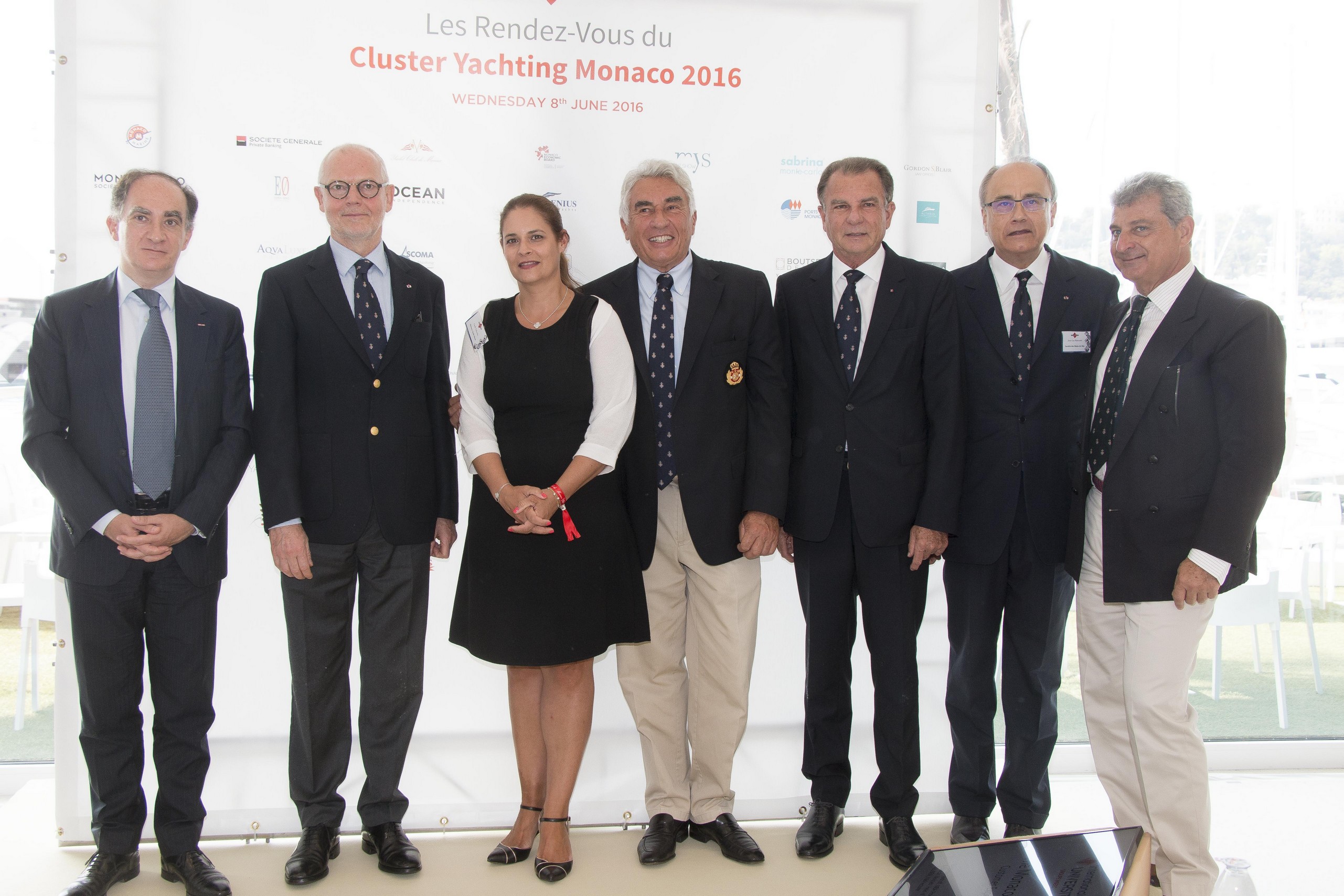 Monaco, Wednesday 8th June. Over 200 people attended the first Rendez-Vous du Cluster Yachting Monaco, held today in the Yacht Club de Monaco attended by the Minister of State HE Mr Serge Telle, who gave the opening speech. A first for the yachting sector in Monaco as it showed its face and key players.

Launched in 2014 and presided by Bernard d’Alessandri, the Cluster Yachting Monaco is one of the actions taken by the Conseil Stratégique pour l’Attractivité (a Monaco Government initiative). The aim is to create a unifying platform for dialogue and a force to put forward proposals to decision-makers. This federation of 300 professionals based in Monaco is the operational arm that should enable the government to defend the sector’s interests to ensure its development internationally. The ambition clearly is to make the Principality world capital of yachting, the Monaco Yacht Show being one of its most effective showcases. The organisers never rest on their laurels in continuing to develop the show as its Managing Director Gaëlle Tallarida explained, with 125 superyachts on exhibition on the water expected in September.

Fully supported by the Monaco Government

Having recalled the Principality’s long maritime tradition, the Minister of State welcomed the founding of the Cluster Yachting Monaco which federates the 300 companies operating in the Principality, and its initiative to organise this first rendezvous with Monegasque professionals. He stressed that the Monaco Government fully supports the industry which generates significant economic benefits and jobs: 300,000 in Europe and some 1,500 in Monaco in 2015. “I count on you and your international experience and professionalism to put forward proposals so we can develop this industry. Discussions are ongoing to make our flag more attractive for an industry that is an important vehicle for promoting our Principality,” said HE Mr Serge Telle.
The Tourist and Convention Authority, represented by its Deputy General Manager Guy Antognelli also confirmed its support for the Cluster and its members.

Yachting – 4th industry in the Principality

Michel Dotta, Chairman of the Monaco Economic Board emphasised that yachting was a sector with enormous potential: “25% of the world’s largest yachts are members of the Yacht Club and that’s an asset to be exploited.”
Yachting figures in the Principality in 2015 (source IMSEE):

• Yachting is the 4th industry in the Principality, alone accounting for more than 5% of total revenue in Monaco.

• The sector represents more than 300 businesses operating in the Principality for whom yachting is the principal source of income.

• The 15 largest companies in the Principality have seen their turnover jump +250% since 2005.

A sector that constantly needs to adapt

According to Espen Oeino, an internationally renowned yacht designer based in Monaco, the sector has undergone significant changes over the last 30 years requiring those involved to constantly adapt, “The industry has changed so much it is essential we work together, to adapt to new cultures, new clients and new regulations which never cease to complicate our job.”
Yet there are many initiatives in Monaco, like the Dynamiq Yacht project presented by its CEO Sergei Dobroserdov. “The new generation is very active and uses latest technologies whatever it is they’re buying. Faced with such expectations we have to change and come up with new ways of taking orders, which from now on should be online. It’s a real revolution for our sector.”
Another innovation, at the initiative of the Cluster Yachting Monaco, is the development of a Masters dedicated to yachting professions as a complement to the training centre, La Belle Classe Academy, launched by the Yacht Club de Monaco last year.
Currently in the curriculum prototyping phase, yachting will be integrated into the Luxury and Management Master offered by the International University of Monaco (INSEEC Group), which will enable students to immerse themselves in this sector.
The profile of Monaco tomorrow After contributions by Jean-Luc Biamonti, CEO of the Société des Bains de Mer presenting major new developments at Casino Square, notably the Hôtel de Paris, and Xavier F. Rugeroni, Managing Director and Regional Vice-President of the Fairmont Monte Carlo, Regis Adeline, General Manager of SAM l’Anse du Portier gave details of the new seaward urban expansion project. By 2025, Monaco will have a new six-hectare district that will include seven seafront villas with gardens and a 32-berth marina for 15m boats, with a strong focus and commitment to sustainable development and protecting the environment.
Aleco Keusseoglou, Chairman of the SEPM (Société d’Exploitation des Ports de Monaco) which manages Monaco’s ports, was keen to stress that yachting was the lifeblood of life in the Principality and the importance of being able to offer more berths to owners calling in. It is for this reason that an agreement signed with a view to operating the port at Ventimiglia (Italy) to increase the number of moorings available is being considered by the government.
Guest of honour, Jean-Claude Biver, President Watches Division at LVMH, shared his upbeat vision of luxury and yachting: “This industry is still very segmented but the potential to develop is colossal. Monaco is the ideal place to promote this passion and desire to escape.”

It’s now up to the Cluster and its members to make it happen!