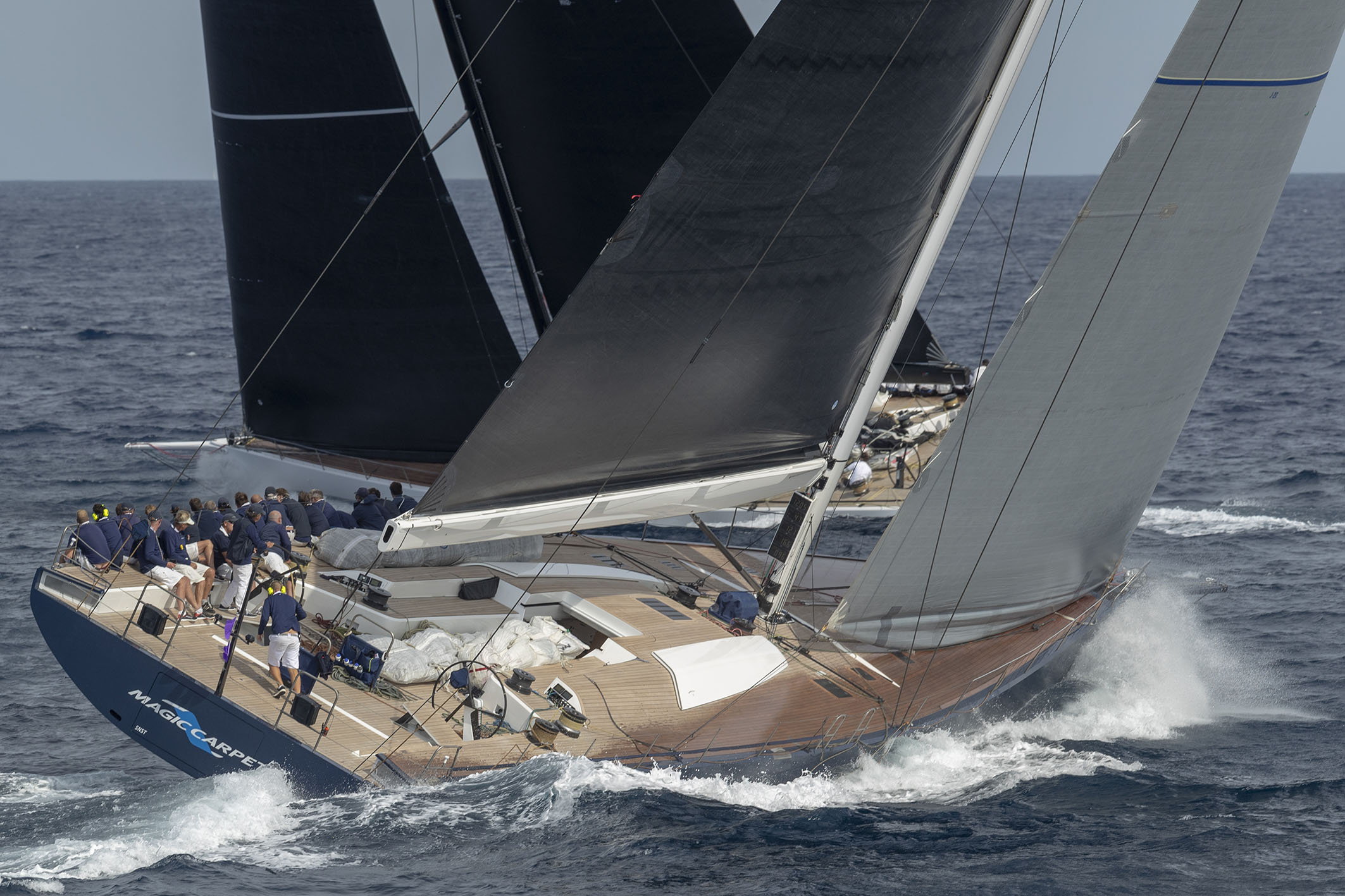 Twenty springs and one summer to perfect the hosting of 300 classic and modern boats: the 20th anniversary of Les Voiles de Saint-Tropez is the main event for the Société Nautique de Saint-Tropez and it’s set to appeal to both enthusiasts and the general public. From 28 September to 6 October, the show will be bursting at the seams once again, taking up all the space on shore, in and around the port and every alleyway of the legendary town in France’s Var department, as well as at sea, in and around the Gulf of Saint Tropez. It’s not every day you’re 20 !

Several significant modifications are lined up for the largest modern craft participating in Les Voiles de Saint-Tropez. In accordance with their wishes, the 2019 races for the Wally class will be given a revamp, replacing the usual windward-leewards – which consist of a certain number of upwind and downwind sprints around marks set in relation to the wind – with a series of coastal courses. They will be competing for the BMW Trophy.
The three Wallycentos Galateia, Magic Carpet3 and Tango, have already booked a spot to be a part of one of the most fantastic naval ballets imaginable between these craft at the cutting-edge of technology, which have literally revolutionised the tight inner circle of luxury yachting with its futurist style somewhat reminiscent of the golden age of yachting in the late 19th century. The boat to beat in 2019 obviously goes by the name of Magic Carpet3: the big monohull with the elegant navy blue livery inspires respect not only within the fleet of Wallys, but also on all the prominent international race zones. Since the start of the season, she’s won the performance category of the Loro Piana Superyacht Regatta in Porto Cervo, in Sardinia, as well as the Silver Jubilee Cup, a trophy awarded to the best yacht in excess of 30 metres with a genuine cruising fit-out, and she’s just finished first racer-cruiser in the main race in the Giraglia Rolex Cup, a matter of minutes astern of a pure racing thoroughbred which secured a place as overall winner in elapsed time. “These results confirm the stellar performance of the Wally Class boats when competing against other yachts in the same category” states Stefano de Vivo, Commercial Manager of the Ferretti Group and Wally’s CEO. “The unique style, the potential for speed and the incredible manoeuvrability of the Wallys are the reasons we’ve chosen the brand to join the yachting segment“. Les Voiles de Saint-Tropez is the only event in France where the Wally fleet come together.

For their part, IRC A – the biggest modern boats to make up the rest of the fleet – will also benefit from a specific start zone off the beaches of Pampelonne.
For the second year running and following on from the success of the operation initiated by the Société Nautique in 2018, an Optimist race for the children of the society members and participants will be organised once again on the Wednesday.

The beating heart of the yachting universe for over sixty years, Rolex is a key partner to the world’s most prestigious races, yacht clubs and sailors. Rolex and the Société Nautique de Saint-Tropez have enjoyed a very special bond for the past 20 years, notably with the organisation of the Rolex Trophy within Les Voiles de Saint-Tropez.
We’ve nicknamed them the “little masterpieces among friends”. After last year’s Fife jubilee, it’s the Epoque Marconi B class, which has this year been selected to serve as the dedicated craft for the prestigious Rolex Trophy. A wonderful opportunity then to shine a spotlight on these classic craft measuring 15 to 17 metres in length, which are the work of some of the most renowned architects of the 20th century and are synonymous with the America’s Cup, the best metre boats and some of the most chic cruisers.
Among the various pretenders for victory, Stormy Weather of Cowes is one of the stars. This Bermudan yawl was designed by Olin Stephens in 1934, when he was just 26 years of age and already had several successes to his credit, including the celebrated Dorade, of which she is an iteration. Built at the Nevins yard, in the state of New York, with mahogany and oak planking, she is proof that boats of noble birth transcend the ages. Sixty-seven years after winning the Bermuda Race, the Miami Nassau five times and the SORC ranking (South Ocean Racing Conference), she snaffled the prize in the America’s Cup Jubilee in Cowes in 2001, and ten years later secured the Prix du Yacht de Tradition (PYTA) les Echos-Série Limitée in her category. Equally appealing is her sistershipSkylark of 1937, restored by the Getty family, a dynasty linked to the Getty Oil Company and the creator of the J. Paul Getty Trust, one of the most influential cultural foundations in the world. The elegant yacht is moored off Les Voiles village alongside Bluebird, a very refined motor yacht, which serves as her mothership.
Another exceptional craft, Jour de Fête, designed by Frank Paine and Starling Burgess in 1930, is one of the rare representatives of the Q-Class, developed in 1904 by the “wizard of Bristol”, Nathanael Herreshoff. Having enjoyed a purely American career, the boat was restored and brought across to the Mediterranean in 2012 thanks to the intervention by a famous French America’s Cup helmsman: Bruno Troublé. A category boasting some of the best boats and naval architects of their generation, we mustn’t forget German Frers junior, son of the celebrated Argentinian architect German Frers, who will be competing for the Rolex Trophy aboard Fjord III, a boat designed by his father.

Among the other classic categories, several boats will be making some eagerly awaited visits to Les Voiles this year, as is the case for Ester. The incredible history of Ester has earned her the nickname “mini Vasa”. Ester is a remarkable racing yacht referred to as a 9 Racer. Measuring 15.24 metres, she was designed in Sweden in 1901 by Gunnar Mellgren. Her radical lines, her original rig – with a very high-peaked mainsail – and her fin keel, mean she is capable of a rare level of performance and is hence a legend in Baltic yachting circles. After a fire broke out aboard, the boat sank in the late 1930s and appeared lost for good… However, the Swedes seem to have a talent for getting vessels free from the ocean’s depths and, in 2015, they pulled off the amazing feat of raising the wreck, which incredibly was still intact after 76 years under 52 metres of water! After a four-year refit, thanks to the unfailing determination of her project manager, Bo Eriksson, Ester arrived in the Mediterranean in the hands of her captain, Laurence Ramès de Moërs, one of the experts in the speciality.

Les Voiles supports the Marine Observatory
Continuing on with the commitment initiated in 2018, the Gulf of Saint Tropez’s Communauté de Commune will host a stand during Les Voiles with the aim of raising awareness and championing environmental actions linked to the Maritime Spaces/ Marine observatory service, with this year’s main theme focusing on “marine waste”, in partnership with the Seacleaner association. On the programme, the reception of the public as well as school groups and the organisation of a round table late afternoon on the Friday with the participation of French sailor Yvan Bourgnon. The “Com Com” has chosen to put its talents to good use along the coastline. It is notably responsible for an application providing a daily insight into the quality of the bathing waters and the creation of “underwater paths” making the discovery of the marine depths accessible to all with a mask and snorkel. After Croix-Valmer and Sainte-Maxime, a new site was opened on 3 July in Ramatuelle, just south of Saint Tropez.

Prize-giving for everyone
Sunday 6 October, from 11:00 hours