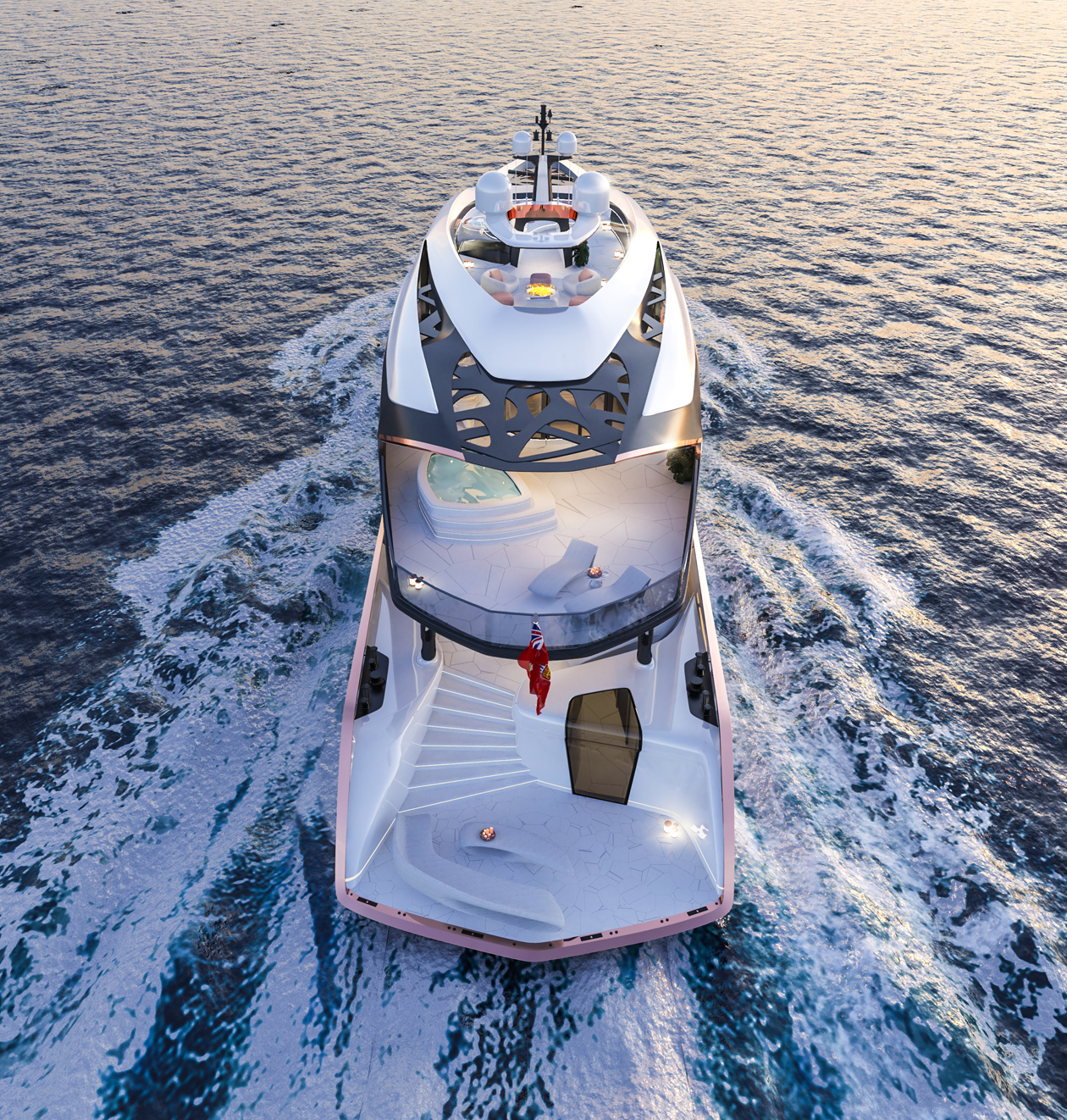 For Vripack – a Dutch yacht design studio anchored by the pursuit of design excellence – the desire to conceive a yacht that enriches an owner’s onboard experience is one of its biggest priorities. When paired with the skill set of esteemed German shipbuilder Nobiskrug, well, that’s the Holy Grail. Working together to break the mould of conventional yacht design, Vripack and Nobiskrug present a new 56m hybrid concept that puts the owner in the driving seat.

Created with a young Middle Eastern or Asian owner in mind, the styling is thoroughlyunconventional. Defined by a classic sheer line, a large over-hanging bow, and a contemporary interior, the 56m concept is more akin to the free-flowing layout of a high-end residence found in Hong Kong or Dubai than a typical yacht.

A sense of grandeur, even from afar, is achieved by a long, drawn-out platform. When an owner first sets foot on board, they are welcomed by a dramatic, mesh canopy overhead and large glass doors that invite the outdoors in. The typical aft tender arrangement has been neatly relocated to the bow with folding bulwarks for easy launching. This allows for direct access from the stern to four equal-sized double guest cabins on one side, and an open plan gym on the other, all of which lead off from an asymmetric hallway.

“What is prime is the flow of people on board, and how the layout is completely derived from giving the maximum user experience,” says co-creative director, Marnix Hoekstra. “Hallways are shaped wider when you enter them and narrower when you exit, so that it draws you in; the shape invites you on board.”

Vast amounts of decorative and structural glass feature throughout, most noticeably in the owner’s suite, and the transparent glass balustrade that runs the entire length of the yacht. “It’s a project that takes glass to the next level, optimising all that the material has to offer,” says Joost Mertens, Vripack designer. “All the side walls of the superstructure are made of glass, there is no metal at all. The design is not constrained by any traditional yachting design rules.”

The hybrid yacht features a technically innovative propulsion system that has been developed specifically for this concept. Designed to accommodate the novel yet functional layout, and prioritising safety and comfort on board at all times, Vripack challenged its subcontractors to produce an evolved engine that optimises the owner’s lifestyle. “To date, yachts like this have height because the big electric motors push the design up – on this concept, we insisted that the dimensions worked for the owner first, and so the engines became ‘pancake-like’ – instead of up, we went flat and wide. We’re pushing innovation in all areas,” says Hoekstra.

Combining the large yacht lifestyle that typifies Nobiskrug’s 500GT-plus platforms with the distinctive bow lines. Starting with its iconic Triple Seven and continuing with further unique designs, the concept delivers an uncompromised onboard experience packaged in more accessible dimensions.

“This concept presents a new segment for Nobiskrug,” says Fadi Pataq, creative director at Nobiskrug. “In combining our strengths with Vripack, this environmentally-friendly, hybrid yacht with its modern design leaves no client wanting and is an excellent step-in model for owners who love the Nobiskrug brand but aren’t ready for a 100m vessel.