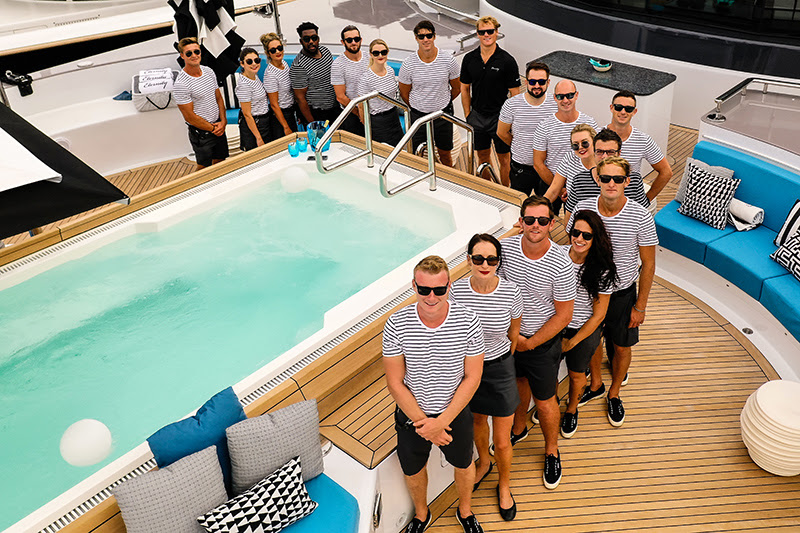 M/Y ETERNITY as debuted at FLIBS is the result of all-encompassing refit planning and positive collaboration between Captain Aldon Beukman and Hill Robinson.

Following an extensive visit in Hong Kong to assess the vessel’s condition in preparation for its relocation to Florida, it was realized that a major project was in the making in order to bring ETERNITY to a standard conducive to the caliber of guests she would be entertaining as part of the Baha Mar resort.

With a detailed scope of work and a sound budget confirmed, the refit period began shortly after arrival at Rybovich on March 17. With an initial period of 22 weeks, accurate scheduling and tremendous experience with scope of works and contractors was paramount to ensure that all works scheduled throughout the yacht were completed.

The worklist covered all technical aspects including major overhaul work to engines and rebuilds of the generators; rebuild of hydraulic appendages including cranes; and other key areas including a full interior redesign and AVIT upgrades of all entertainment and navigational systems. As noted by Hill Robinson Project Manager, Chris Wright, “This complex and challenging refit was in part achieved with the direct involvement and support by the captain and his phenomenal crew, but also by detailed planning and knowing the right vendors to call. As many projects have experienced, you don’t know what you’re going to get until things are opened up, so being able to plan for the unexpected is vital.”

As ETERNITY operated in a purely private capacity before arriving in the US, this refit period also allowed HILL ROBINSON to conduct several technical assessments and an internal audit for Class and Flag compliance, resulting in the full commercial compliance with MCA Cook Islands Large Yacht Code and Lloyd’s Register. The vessel is ready for charter activities with unlimited capabilities.

As clearly demonstrated by the appearance at FLIBS, the refit was a fantastic success, demonstrating the impact that Hill Robinson can have when working with a yacht and its crew on significant projects, understanding that full time project management, planning and budget are imperative for a successful refit and client satisfaction.