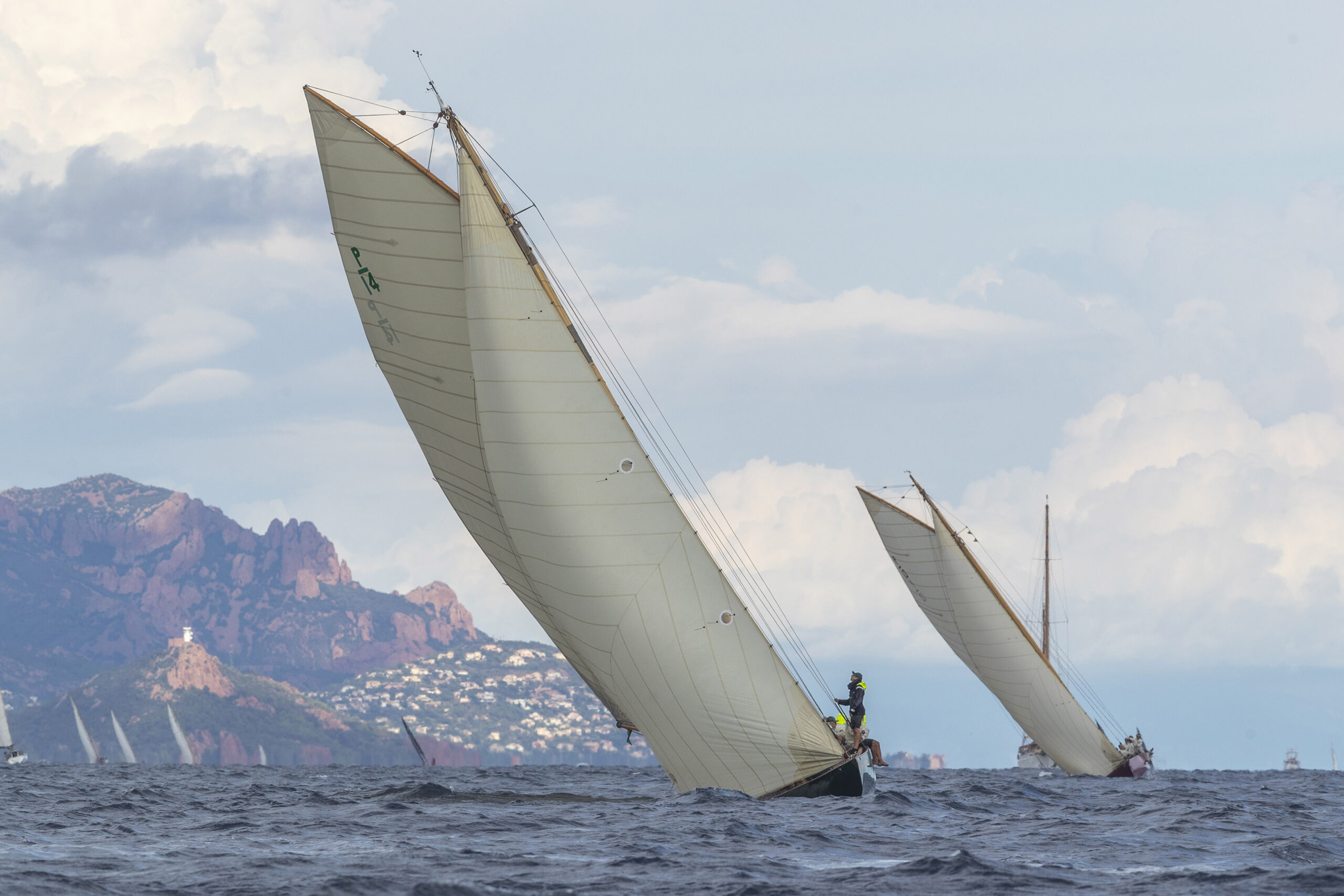 By way of an appetiser to Les Voiles, 35 Classics race in from Cannes!

After two editions coloured by Covid, Les Voiles de Saint-Tropez is bouncing back with a new and improved 2022 edition and an even more enchanting line-up. 200 Modern and Classic yachts will compete in the first week, followed by a splendid gathering of 50 Maxis in week two, for a glorious 24th edition! With the two-week format now running like a well-oiled machine for both the Classic and Maxi fleets, the enthusiasm amongst the owners, skippers and racers is palpable. Unsurprisingly, this jewel of a port in France’s Var region is filled to the brim, with the accents of a good twenty or so different nationalities injeting a truly international vibe into festivities.

The Sunday race connecting Cannes and Saint Tropez always heralds the start of the fortnight of festivities at Les Voiles de Saint-Tropez as 35 Classic sailboats power into the gulf, fresh from the Régates Royales de Cannes. Split into 6 classes, many of these elegant yachts have been competing in the Yacht Club de France’s Cup for over 30 years. Among those vying for supremacy were the 12mR France and French Kiss, as well as three members of the P Class, Chips, Olympian and Corinthian. The lack of breeze off Cannes forced the Race Committee to shorten the course, with competitors setting sail from ‘La Chrétienne’ cardinal mark some 19 miles from Saint Tropez and crossing the finish off Le Portalet. Ultimately it was Olympian, which secured the win in both elapsed and corrected time ahead of her two rivals from the Epoque Aurique category. Among the Grands Classiques it was Argyll, which snatched victory just two minutes ahead of Comet. Palynodie II triumphed in corrected time, while Sagittarius took the win in elapsed time. Carron II was first in the Epoque Marconi class, ahead of Anne Sophie and One Wave, while the duel between the 12mRs saw France get the better of French Kiss. Finally, victory among the Tofinous went to Team 42, ahead of Circe and Pippa.

125 Modern yachts to hit the racetrack from Monday

Racing at Saint Tropez surely has to be one of life’s great pleasures, especially for connoisseurs. Taking victory here takes on an unequalled level of prestige with no fewer than 125 skippers and their crews battling for supremacy from tomorrow. Split into 5 groups of monohulls measuring up to 18m28 and primed for racing, they will be going all out in their quest for a trophy. The North Sails Trophy rewards the best IRC B, which groups together yachts measuring up to 60 feet, including the Swan 53, Grand Soleil 50, Baltic 50 and First 53…. which equates to 20 thoroughbreds at the very top of their game. Another thrilling sight will be the IRC Cs competing for the BMW Trophy, which rewards sporting excellence and technical performance amongst a stellar group of 26 craft, which are often dominated by the fabulous 52-footers. Nanoq, Frederik, Crown Prince of Denmark’s TP 52, reigning champion, Daguet3 (Ker46) and Arobas2 (IRC 52) will once again be the ones to beat. With 32 boats signed up, the Suzuki Trophy will reward the ‘best in show’ in the packed IRC D group, where quantity and quality are on another level. Just short of 12 m in length, 26 boats will be competing in IRC E, with 22 in IRC F, including very elegant, classic inspired dayboats, Tofinous, Code 1s and Wally Nanos, combining luxury, comfort and performance. Battle commences tomorrow, Monday, from 11:00 hours.

The Classic yachts from Tuesday

82 classic yachts will join the fray from Tuesday with their gaff and Marconi sails mixing it up with the Kevlar sails of the Modern yachts. From the smallest craft, Dainty (Westmacott 1923) and her 8.20 m waterline, to the biggest, 55 m Shenandoah (Theodor&Ferris 1902) and the oldest, Mad Cap, launched in 1894, the unchanging elegance that epitomises the heyday of yachts will grace the race zone off Saint Tropez, putting on a magical ballet for all to see. From massive schooners to a fantastic fleet of yawls and Marconi ketches… Les Voiles 2022 once again boasts one of the finest line-ups of classic yachts in the world.

“There are a plethora of new innovations at this year’s Voiles, both on the water and on land, and the event’s partners are even more loyal than ever, starting with the Town of Saint Tropez, without whom none of this would be possible. I wish everyone a wonderful fortnight, drenched in an atmosphere of sport, sociability and sharing that is synonymous with Les Voiles.”

“For the third edition in a row, Les Voiles will span two weeks; the first gathering together 125 Modern IRC yachts and 82 Classic yachts. If we add to that the 50 Maxi yachts from the second week, we’re back to the entry numbers of the heyday of Les Voiles, albeit with improved legibility for the races and increased visibility for the boats. Though the number of berths in port is the same, the event continues to go from strength to strength, so it’s guaranteed to be an eyepopping spectacle for spectators.”