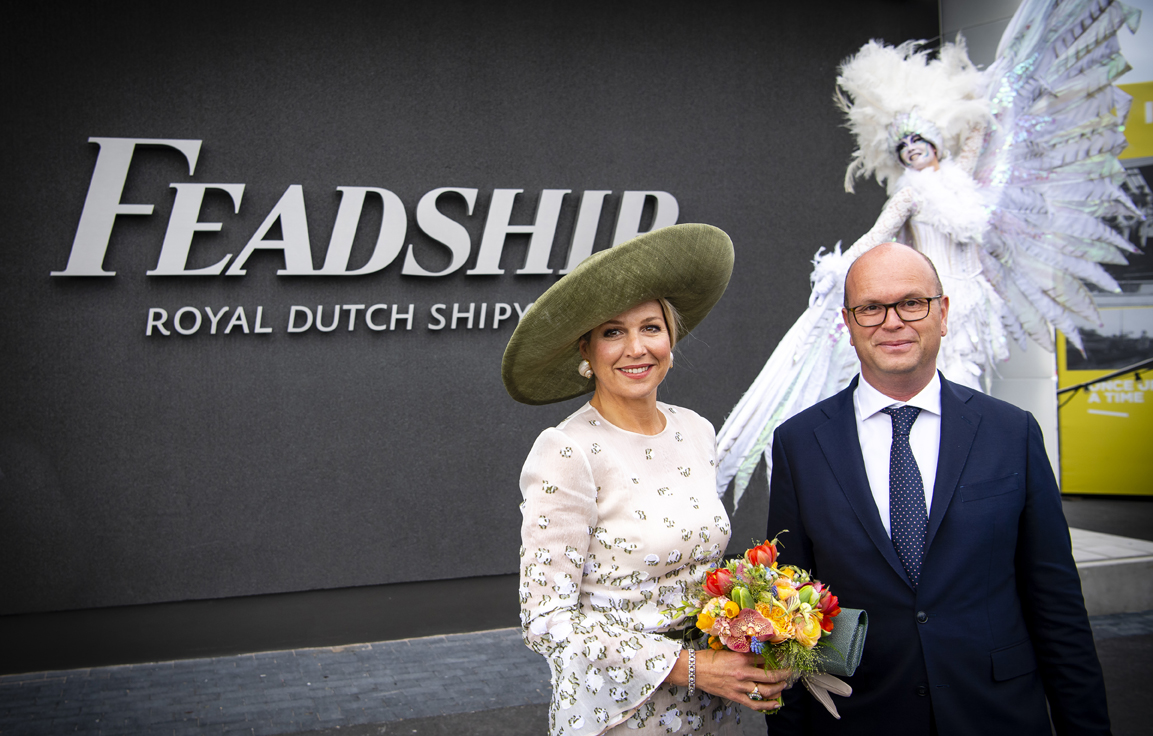 Measuring an impressive 425,000 cubic metres, the facility is the most eco-friendly superyacht yard in the world and the pinnacle of contemporary design. Before entering the giant construction hall, Queen Máxima was introduced to Dick Van Lent, the fourth generation of his family to have led the yard until his retirement in 2016. This year marks the 170th anniversary of Royal Van Lent, one of the two yachtbuilding family dynasties that makes up Feadship along with Koninklijke De Vries Scheepsbouw in Aalsmeer and Makkum.

Her Majesty then viewed nineteen classic yachts presented along the quay, all members of the Feadship Heritage Fleet. She also met young graduates from the Feadship Academy and several generations of family members who work at the Royal Van Lent yard in Kaag. Royal Van Lent director Peter van Mil – who managed the build project – showed Queen Máxima how solar panels, district heating and LED lighting have enhanced the energy efficiency of the new facilities. Last but not least, Bram Jongepier, senior specialist at De Voogt Naval Architects, explained the innovative and sustainable approach that Feadship takes to building superyachts.

After the royal party had entered the state-of-the-art construction hall, a number of key speakers shared their vision on this milestone moment in superyacht history.“ This new facility will allow Feadship to stay at the cutting edge of innovation and continue to build superyachts that will change history,” said Toni Belloni, Group Managing Director of LVMH (owner of Royal Van Lent). “LMVH always prides itself on employing the finest artisans, and it is certain that the best yachtbuilders in the world are working for Feadship Royal Van Lent.”

Koen Overtoom, general director of Port of Amsterdam explained how thrilled his organisation was to welcome such an incredible yachtbuilding operation into the heart of the Dutch capital. “The knowledge, craftsmanship and employment opportunities will further strengthen the port of Amsterdam and its surrounding regions. In the 1600s there were 26 boatbuilders located here, with three new vessels being launched every week and many thousands of people employed. This shipbuilding is in our DNA and four centuries later you can see the passion in the amazing superyachts created by Feadship.”

Jan-Bart Verkuyl, CEO of Royal Van Lent, concluded the speeches by thanking the Port of Amsterdam for its cooperation over the past years and the dedication of all those who had been involved in building the yard. “As we celebrate our 170th anniversary, our predecessors could never have imagined such an exceptional facility. Almost everything has changed over the years, but the one thing that has remained consistent is the skills of the workforce. Their constant desire to make things better has allowed Feadship to become the world’s leading superyacht brand.”

The facility in Amsterdam will operate in tandem with the Royal Van Lent yard on Kaag Island, which continues to run at full capacity. The two yards will share the same management team and corporate culture, with 450 skilled employees from a wide range of outfitting and refit disciplines moving between the facilities as and when required. A further 150 new jobs have been created for highly skilled yacht builders, a demand which is in part being met by the award-winning Feadship Academy training schools. The first project is already underway in Amsterdam as construction moves forward on an 88-metre Feadship currently known as Project 816.