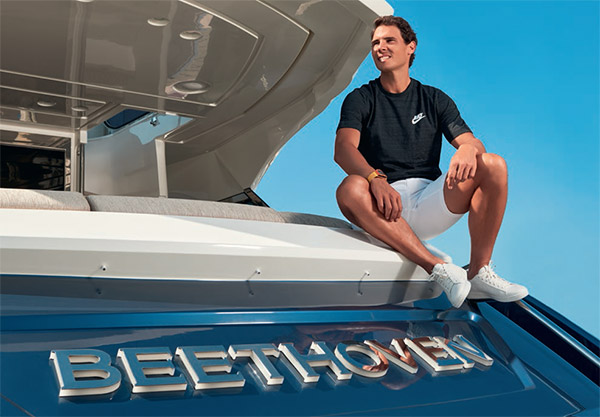 MONFALCONE, SEPTEMBER 2017. 16-times Grand Slam winner Rafael Nadal has chosen the iconic MCY 76 as the yacht of his childhood dreams. Monte Carlo Yachts delivered the boat in Spring 2016, allowing the tennis player to get the most out of his brand new vesselalong the best beaches and bays the Mediterranean has to offer, in comfort and in style. Known as the “King of Clay”, Nadal recently won the 2017 US Open following an outstanding season and is widely considered as one of the greatest tennis players of all time and viewed by some sports analysts, tennis writers, fans and media pundits, as the greatest tennis player of the Open Era. He has achieved a record 10 titles at three different tournaments: French Open, Monte Carlo and Barcelona. He holds the record for most titles at 3 different levels, ATP500 (Barcelona: 10), Masters 1000 (Monte Carlo: 10), and Grand Slams (Roland Garros: 10).

Rafael Nadal was first introduced to his yacht-to-be at the prestigious Cannes Yachting Festival in September 2015, selecting it over hundreds of other yachts on show at the event. In 2017, Rafa returned to Cannes to visit the Monte Carlo Yachts stand for his first public appearance following the US Open victory. Like the tennis champion himself, the MCY 76 has won numerous awards, making it the most widely recognised yacht in its category.

The naval design and features that the MCY 76 introduced to the world have become defining traits of Monte Carlo Yachts, such as the timeless and refined style, the iconic profile and the pulpitless high flared bow, the original, innovative details and the incredibly large spaces and features usually reserved for much larger yachts. The successful history of this unique model and the Italian brand is based on solid know-how and a strong strategic vision based mainly on two main drivers: design and product innovation combined with a revolutionary patented manufacturing process.